Abdel-Fattah ‘Afifi, from Al-Menofia Governorate, spent a whole weak trying to work while suffering from the novel coronavirus symptoms. A doctor at a hospital contracted by his employer forced him to go back to work in June 2020 after spending three days only in isolation; declaring falsely that he has recovered.

After his symptoms worsened, he went to Ashmon Public Hospital, a government health center for isolating coronavirus patients. There, he got a report saying that he had to self-isolate at home for 14 days, after which he returned to work where, to his astonishment, he was told he had been laid off, he told us.

‘Afifi’s case violates Article 54 of Egypt’s Labor Code, which states that workers have the right to take a sick leave as requested by a specialist medical authority.

Ashraf Abbas, a labor lawyer, says the first medical report couldn’t be taken as evidence that ‘Afifi recuperated. “The Ministry of Health designates the hospitals that can say who’s infected by coronavirus and who’s not,” he says.

‘Afifi filed with the Labor Bureau a lawsuit accusing his company of arbitrarily dismissing him. The lawsuit became Case 696/2020 at the Labor Court of Northern Banha, and a ruling is yet to be reached. In the meantime, ‘Afifi has been unemployed since last July, and remain so by the time this feature is published.

“A worker proven a sick person has the right to a sick leave decided by a specialist medical authority and during which the worker has the right to compensation pay as stipulated by the Social Insurance Law.”

‘Afifi is one of nine people with confirmed or suspected coronavirus infections whose right to sick leave have been denied as documented by this feature. This right is protected by the Labor Law and many ministerial decrees issued since coronavirus reached Egypt. For example, Decree 8/2020 by the General Authority for Health Insurance (Egypt equivalent of social security) states that people with coronavirus symptoms have the right to a 14-day leave or until they test negative.

Since the novel coronavirus reached Egypt, about 17,000 worker faced various violations, according to the Center for Trade Union and Workers’ Services

Articles and Decrees... Ink on Paper

When novel coronavirus reached Egypt, the Prime Minister issued Decree 719/2020, which regulated coronavirus leaves. In articles 3 and 9, it states that people isolating at home or in hospital according to a decision by a specialist medical authority are eligible to an exceptional leave that isn’t deducted from their sick or regular leaves. But such decree did not apply in the case of Ibrahim ‘Aziz.

The decree applies to workers at the state’s administration and public and private companies. It gives coronavirus patients, their contacts and most vulnerable people the right to exceptional leaves.

Decree 8/2020 by the General Authority for Health Insurance

The decree applies to all workers. It gives exceptional 14-day leaves to many categories, including coronavirus patients with moderate cases, and leaves until recuperation to patients with severe cases. 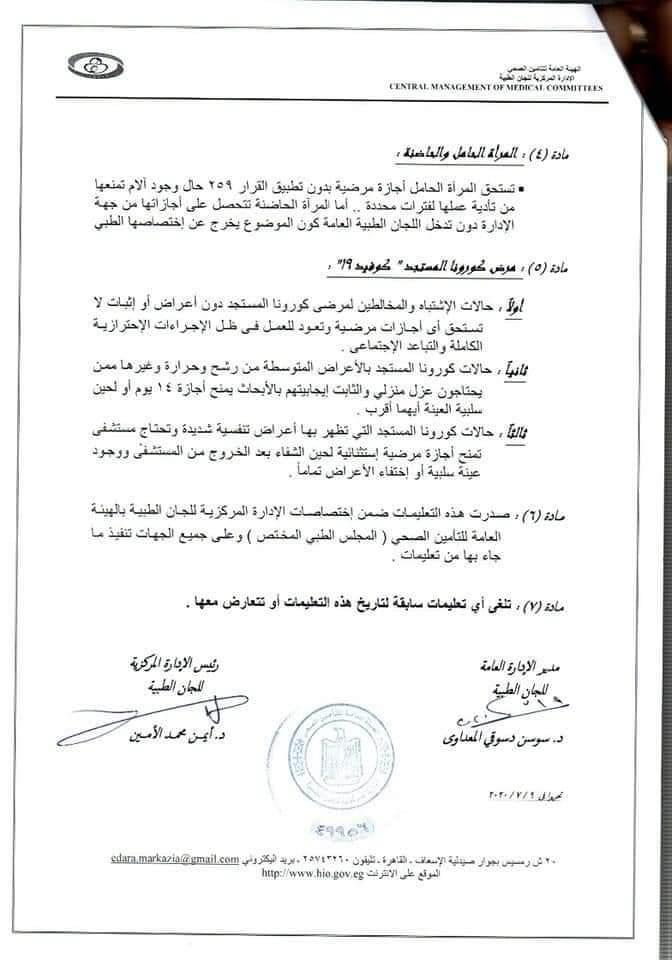 Periodical Release 13/2020 by the General Authority for Health Insurance

The release gives contacts of coronavirus patients a 14-day leave if the patient’s tests prove their sickness and the contact proves to live nearby. 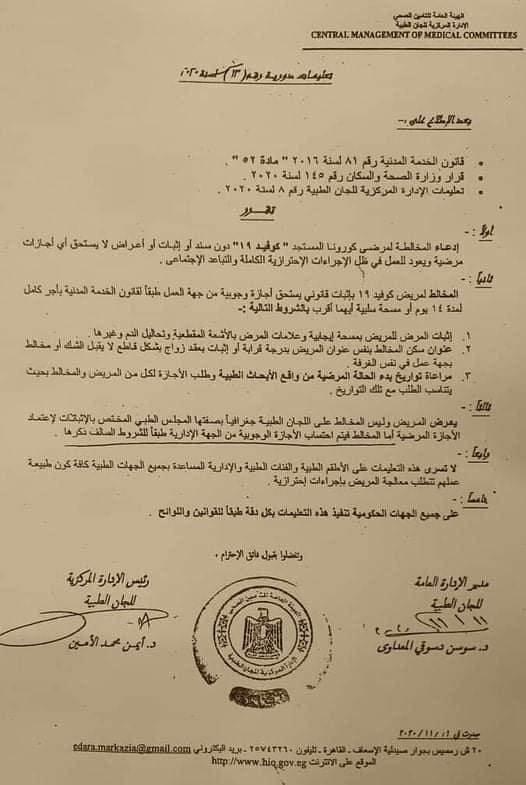 Ibrahim, a civil servant, contracted coronavirus in April after he was in contact with another Covid positive patient. Ibrahim documented his sickness with the General Authority for Health Insurance, which decreed that he should self-isolate for 14 days. After returning to work, he found that his leave was filed as a sick leave, not as an exceptional leave, as his filed complaint at the Administrative Control Authority shows. Ibrahim says,

Every 3 years, we’re eligible to 90 days of sick leaves; if I take more than 90 days, deductions are made to my pay

After losing his usual bonuses and incentives because of misfiling his leaves, he complained with the Alexandria region’s head for real estate taxes, but the Real Estate Tax Authority rejected his complaint. He filed another complaint with the Office of Financial General Prosecutor, calling for his leaves to be counted as exceptional; but the complaint is still pending.

The cases of Ibrahim and ‘Afifi are supported by the results of a (non-objective) survey we ran on social media through which we got 17 respondents.

About 64%* said they faced various violations to their right to sick leaves, including pay deductions, forced return to work and even arbitrary dismissal. Most respondents (63.6%) worked in the private sector. Ashraf Radi** was one of them.

Who responded to the survey?

The legal procedures were taken by respondents

Those who submitted medical supporting documents

Radi was a department head at a startup. After his wife contracted coronavirus in January, he self-isolated because he was a contact. He agreed with his employer to work from home, but once back to the office, the employer gave him a lower pay before dismissing him without giving him his dues, he told us.

According to emails exchanged between Radi and his boss and seen by us, the boss was aware that Radi is suspected of having caught the virus too. The Occupational Safety and Health Checklist for Biological Hazards issued by the Ministry of Manpower and Immigration and the International Labor Organization (ILO), states that employers should encourage workers suspected of contracting coronavirus to not come to the workplace.

In March, Radi filed Complaint No. 3639423 with the Ministry of Manpower and Immigration, but he says the complaint remained dormant until he talked about his problem to an official with the Administrative Control Authority. The official managed to get the complaint moving, leading to negotiations with the employer, which ended in Radi getting part of his dues.

Sulaf Darwish, head of the Parliamentary Committee on Manpower, said the State offered many decrees during the coronavirus pandemic to protect Egyptian workers and enhance their living conditions, including bank loans, deferred loan repayments and other soft loans.

Through the Central Bank, the State offered many grants to protect labor during the coronavirus pandemic, she said, and while some companies tried to lay off workers, Labor Bureaus fended off these attempts and imposed large fines on such companies once the bureaus received many complaints.

Like many tourist and hotel facilities “M”, a hotel on Al-Haram Street, received a subsidy from an emergency fund set up last year by the Ministry of Manpower and Immigration, in cooperation with the Federation of Tourism Chambers, to help these facilities pay the wages of their employees. This subsidy is equal to 100% of the basic salary or at least EGP 600, and was supposed to be paid to insured employees, according to a list we obtained.

We double checked the list with Issam Sa’dawi, member of the Federation of Tourism Chambers. “This list is related to the fourth and fifth payments (of the subsidies); EGP 600 for each employee, starting in March,” he says. “We applied for the sixth and seventh payments.”

Yet, Amr Ali and Imad Mohammad, who worked for hotel “M”, were arbitrarily laid off together with many others.

Amr was laid off a week after he contracted coronavirus in early February and was told so by phone. Although he told the hotel about his sickness, he was asked to show up after his self-isolation period was over to conclude his dismissal formalities.

Amr joined others in a collective lawsuit filed by the dismissed workers’ lawyer, Shaaban Khalife.

The labor lawyer said employers took coronavirus sicknesses as an excuse to arbitrarily fire workers in the face of difficult economic conditions, despite that these conditions have affected everyone.

He alone documented the dismissal of 200 workers while they suffered from the novel coronavirus, he said.

After dismissal Amr, the breadwinner in a family made up of his wife and three children, found himself with little income and no compensation.

Mohammad’s story isn’t very different. He was fired while he suffered the disease’s symptoms. He says that he tried to get back to work but to no avail and that the hotel didn’t pay him his dues.

Three workers who were dismissed from the hotel told us that they didn’t know about the grant and didn’t get it separately.

During economic difficulties witnessed by companies, especially in the tourism sector, many workers were fired, said a report by the Center for Trade Union and Workers’ Services, which traced many dismissals and open leave of absences.

The center, a non-governmental organization founded in 1990 and focusing on labor cases, reported 17,000 violations in many sectors, including tourism, manufacturing and even education.

termination of the contracts

liquidation without compensation for the workers

The report quoted the Forum for Development and Human Rights Dialogue as saying that the Red Sea Governorate witnessed most complaints of right violations against tourism sector workers, followed by the Cairo Governorate then the Giza Governorate where Amr’s former hotel is located.

We asked the spokesman of the Ministry of Manpower and Immigration about its role in protecting the rights of workers documented by us and the Center for Trade Union and Workers’ Services. After making sure that the spokesman has received the questions, we asked him to reply within a week. No response has been received even by the time this feature story has been published.

The nine cases documented in this feature are still pending with the relevant entities. Those workers are part of thousands of peers working for more than 60 employers whose rights have been violated in various ways during the coronavirus pandemic as documented by the Center for Trade Union and Workers’ Services. These also await rulings in their cases by relevant authorities.

* These percentages represent the survey’s sample only and can be seen as an indication of a problem in the application of sick leave laws and decisions related to coronavirus and it can’t in any way be seen as expressive of all workers who contracted coronavirus in Egypt.